Thinking this morning about how I could expand the text-pic project to generate meta images for any WriteFreely blog, so sharing the blog to social media wouldn't include the standard WriteFreely / Write.as logo anymore.

I'm thinking it'd include the blog title, description, and maybe instance name. We'd generate and cache this image whenever a collection (blog) is created or updated. In WriteFreely, it'd also update when the instance name changes.

When we launched Write.as Pro, we didn't have a “free trial” option. The assumption was that enough of the platform was free that users could get a pretty good idea of whether or not the purchase would be worth it. Then last January, we added the option for a free 2-week trial. Here's a few things learned from it:

One of my major concerns was that people would use the free trial to spam Read Write.as, which is kept spam-free largely because of the requirement to pay something. Luckily, only about 2 or 3 spammers actually did this in the past year. Their presence was obvious, and we quickly revoked their publishing access once we saw them.

A free trial made many conversations much easier. If someone was curious about a Pro feature, instead of explaining it all, we could just give the overview and say, “go try it for free.” Great timesaver. Also:

Stats for just over a year of free trials:

I've been putting most of our Write.as tutorials and other videos on our PeerTube instance. But today I added some missing ones to our YouTube channel, too. I'm spending a bit more time on marketing and other helpful materials as a few long-running projects for the team start to wind down. So I'm aiming to start sharing that more.

Made more progress on my weekend project, a tool for generating images like this for social media: 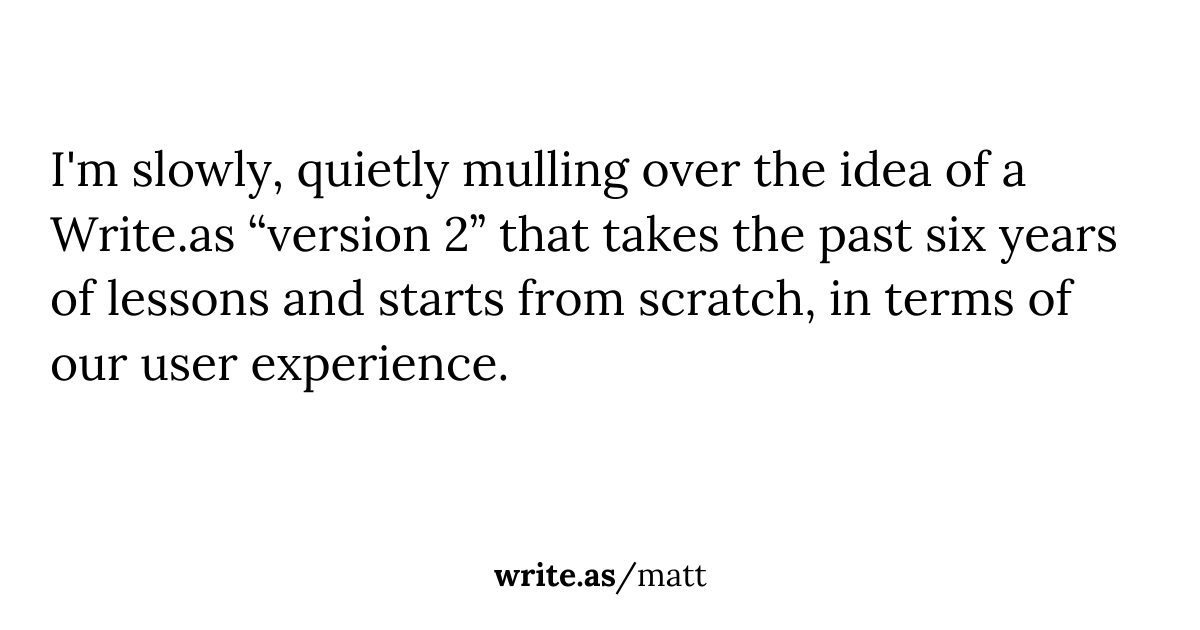 Right now, it's an open source command-line tool written in Go, with a few configurable options. You can find the AGPL-licensed code on GitHub and start using it now!

Next, I hope to add a web-based option for generating images. That'll probably involve some basic server configuration (e.g. only generate graphics with a certain WriteFreely instance name), some image caching to save resources, then a simple API and a plain HTML page that hooks up to it.

I'll first build this for our use case, which is showcasing photos to share on social media pages like Instagram. For that, I need to generate images on mobile and be able to quickly copy over caption text. Then, we'll make it more widely useful to help people spread their writing.

For now, my real day has started, and I'm back to work on features and fixes for Write.as.

Playing around with a tool for generating nice-looking images from text this morning. Started off using an HTML5 Canvas, and quickly hit resistance. Got a complete Go-based prototype working in about 2.5 hours, thanks to this tutorial.

This would replace my Bash / ImageMagick-based script I previously used to generate images like those on our Instagram page. I'd like to convert this into a web-based tool and make it available for anyone to create this kind of content — perhaps even automatically from a Write.as / #WriteFreely post.

For now, I'm off to the woods to go camping. Will get back to work tomorrow afternoon.

I haven't bought a brand new machine in 8 years. Today I work on two devices, a System76 laptop from 2012 (bought new at the time) and a circa-2010 ThinkPad X201 (bought used; this is my second one). The ThinkPad is my portable device. It gets the job done, despite its age and small size. The System76 machine stays on my desk at home, basically as a desktop computer. But it's started to show its age, and I'm consistently hitting the limits of its 8GB of memory. I figured it was time to get something more modern for whenever I'm working in my home office.

I'll be keeping the ThinkPad for working away from my desk. But I'm replacing my “desktop” machine with a System76 Thelio, with 64GB of memory, many TB of storage, and new everything else. I haven't had a desktop computer since I was probably 16 years old. Now I'm looking forward to creating a nice, permanent setup that helps me get more work done.

Always amazed at how much difference a good night of sleep makes. Literally feels like gaining new powers when I wake up rested. Yesterday was that rested day for me; today, not so much.

Much of that was staying up late last night to handle a backlog of issues and correspondence. This was an exception to my normal days — I've mostly kept to 8 hour work days for the last several months. But sometimes working into the night helps me focus and just get the work done, instead of vacillating on it all.

Thinking about how easy it was to set up this new blog on Write.as:

Can't overstate how nice it is to have a tool that can bring something to life on the web so quickly.

In less than 30 minutes I have a microblog on a custom domain, with SSL, personalized theme, and a few posts already published, thanks to @writeas__

...and mostly, that's because I know the platform so well. I know the sharp edges and ideal paths to take to do what I need to (even those that are painful to work around).

Besides fixing the things that need fixing, obviating the need for learning new tricks, I would love to build a dedicated place to learn how to use the platform from the people who know it best; not just “user guides” but a small “school” for learning how to best use Write.as, Snap.as, and Submit.as.

Mostly, writing on @matt@write.as has gotten heavier over the years. With more visibility comes more pressure to write something fully fleshed-out, and right now, I find myself with less time to give my writing all that attention. So instead of at least something getting published, half-drafts get written and then filed away forever. Hopefully a change in format will change that. (I'll try to ignore any audience expectations and largely write straight from the brain.)

This blog is now set up on micro.baer.works, and includes a custom theme copied directly from my baer works site.

Custom theme took about 10 minutes translating everything, adjusting via trial and error. One time, the Customize page showed me an old (cached) version of my Custom CSS, requiring a refresh. Otherwise the process made a strong case for a “V2” default style on Write.as / #WriteFreely. Among other painful CSS rules and !importants, I repeated this CSS fix from matt.writefreely.dev to make the home page font size consistent:

Also enabled fediverse support, but a critical bug still exists. I hope to investigate and fix once other high-priority issues are off my list.