Spent the last hour creating a very minimal desktop app for Write.as / Musing Studio customer support. It’s just a bare-bones browser that only loads our forum — which is where all public and private support requests go right now.

My earliest thoughts today were about my digital work environment, and how it’s basically just the browser, and how distracting that is as someone who always has 50-plus tabs open at any given moment.

I think it’d be much nicer to, in the morning, click an icon on my desktop that opens my digital “office.” It’d only show me exactly what I need to work. And at the end of the day, I’d simply close out of the app. Maybe this is a step toward that.

This week, I started to crack a little bit, mentally. I've let a lot of work slip recently, which I feel bad about. Feeling bad about not responding to emails and not making progress on code has led to me feeling even worse, until eventually I'm too paralyzed to do those things, even if I wanted to.

As this awareness in me came to a head yesterday, I finally spent some time writing last night. Opening my favorite notebook, I realized I hadn't actually done that in about a month. I started to write about what I've been seeing in myself, solidifying those light feelings that appear, but often go neglected for some stronger external stressor.

I had a shallow sleep last night, which is unusual for me. I kept waking up, feeling like barely any time has passed, and I was still just trying to fall asleep. After my dog woke me for an early breakfast, I laid in bed for a while, trying to train my mind onto something other than everything on my plate, all my to-dos and obligations. I tried to think only about what I would do first after getting up. I thought about how things had started to pile up in my apartment; about how I normally just get up, check my phone, and sit down at my computer, letting the metaverse sweep me away in whatever trouble is happening there.

I didn't want to do that today. So instead I picked up the apartment, washed last night's dishes, sorted through my junk mail. I put clothes away, cleared space on my desk, jotted down my perspective this morning.

There was a practice I started last November where I wouldn't start working until I did something completely unrelated, creative, etc. At some point I fell out of it, but I think I'll start that again. Here's today's entry toward that end. Now to start the day.

Had a nice weekend camping with writer friends and acquaintances on the north shore of Long Island. I’ve always enjoyed camping alone, for the solitude and communion with the wind and the trees and such. But it’s also nice to be with people out in nature, enjoying all the space, playing in ways the city doesn’t afford. I didn’t do much writing or drawing like I planned to, but I shot a few pictures on the film camera, and enjoyed some privately epiphanous moments on the beach at 2am. 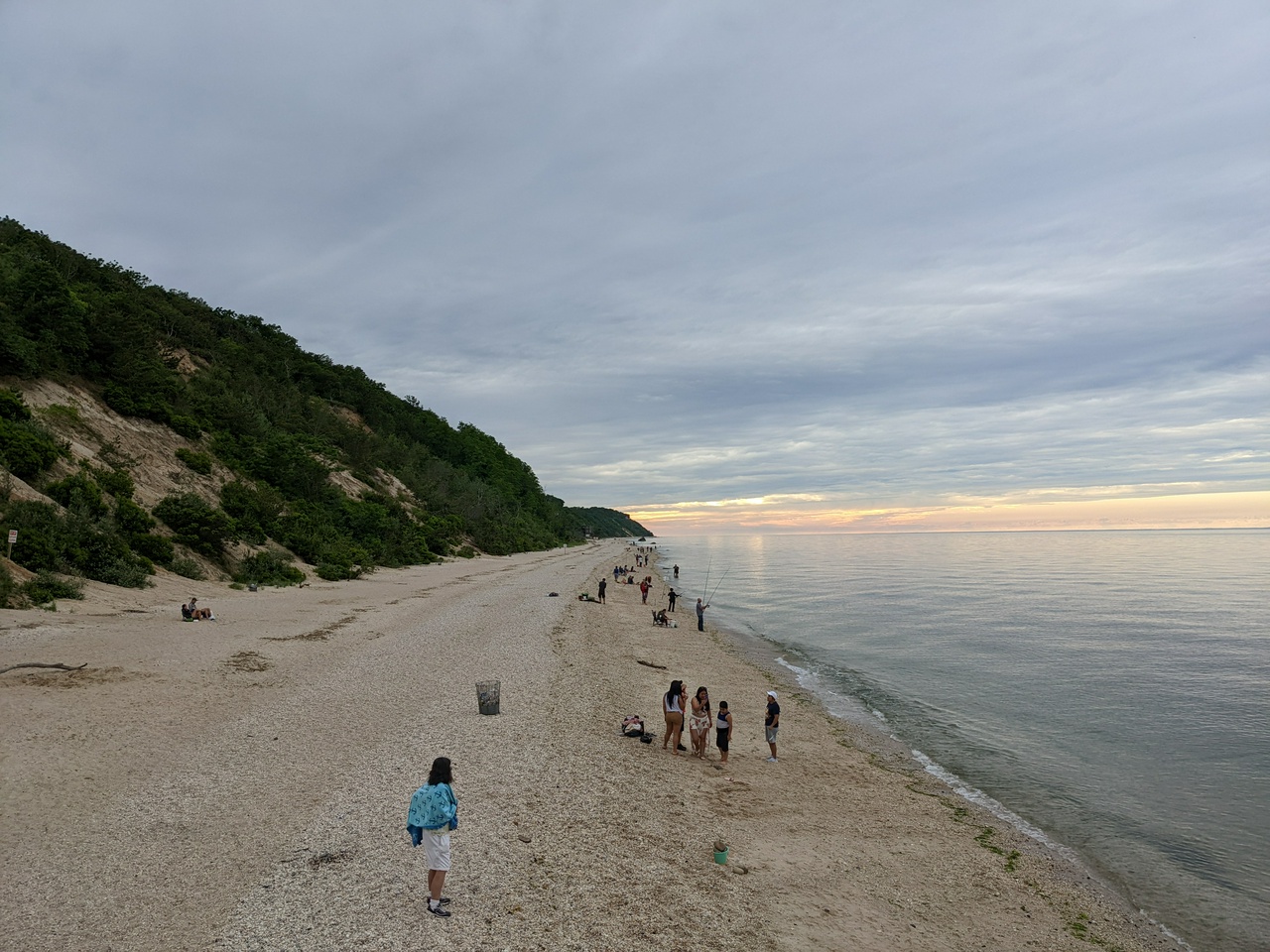 Had a great time hanging out in the Remark.as chat room today! Thanks to @tmo@write.as for making the suggestion and getting us all together.

This was also a chance to test out the custom-built chat room, and we definitely ran into a few problems with connectivity. We all managed to work around it, but I’d like to get us something much more stable.

Also, this little chat hour had us wondering why these sort of chat / real-time interactions aren’t more available elsewhere on the web. So I’m working on getting an IRC server up and running for now. That should make it easy for people to access on desktop and mobile, if they’re comfortable with IRC, and I’ll add a web interface on Remark.as to make it easy for everyone else.

I’m choosing IRC because of its relative simplicity / fit for our use case, and the wide range of clients available. I think the only major downside is if people want to connect from multiple devices. If anyone has any thoughts, please feel free to share!

I can see some functionality of Read.as merging with Remark.as in time. Whereas I think we need a line between creating something and sharing / talking about it (e.g. Write.as vs. Remark.as), I think the line between reading something and talking about it should be a little thinner. So things like following blogs and bookmarking posts will be at home on Remark.as (playing off the blog bookmarking feature just added).

At my weekly writing group last night: a mental block.

I’ve been working on some poetry that I’d like to read publicly. It all revolves around the usual themes I write about, just presented more as a feeling than something literal. But I’ve had a lot of trouble getting out of writing literally. I think it’s my habits — all the written communication I do on a daily basis — plus the fact that I rarely leave this mindset. I don’t read much fiction and creative writing these days, and I think I’m seeing how much I need to again.

Back to work today. As mentioned on the Support Status blog, I was out for most of last week — a friend came to visit me in Brooklyn, and then I went back to Florida to close on my house. I stayed for a long weekend and spent most of the time with friends there.

This past month has been very busy and a little stressful as I worked on getting the house renovated and then sold from here. So I’m glad it sold quickly, and to be done with the process.

Now I’m getting caught up on support requests from the last week. I’m also looking to get more people involved with WriteFreely, as several people have recently mentioned they were concerned it’s no longer maintained — it is, it’s just moving at a one-person pace 🙂

Some brief thoughts around Twitter accepting Elon Musk’s bid to buy it and take it private.

Whether worries about what happens next are founded or not, it’s good to see Mastodon and the #fediverse getting some attention. We saw our little Mastodon-powered community grow a bit yesterday (as did many others), as this tweet got spread around:

In light of the Twitter news, here's a reminder that we run a little microblogging platform especially for writers, https://t.co/fMXJjBmTBa, powered by @joinmastodon ?

Now, on those worries: while this could mean a billionaire owning Twitter, intelligent people have rightly pointed out that Twitter is already owned by the controlling presence of a corporate board. Maybe neither situation is the best thing for a “public square” (that’s more of a shopping mall).

It's embarrassing that we've been willing to have our public, civic conversations on platforms controlled by corporate boards. Musk's purchase of Twitter just makes that absurdity even more apparent. Unfortunately, the solution is not as simple as mass migration to Mastodon.

You might say we’ve often just ignored this all along. Which, again, is why I’m glad that this is at least sparking a conversation around the question of Who really owns the platform?

It’s also got me thinking again about user ownership of Write.as. I think that’s the real, long-term answer to questions that come up when your social media platform goes up for sale. Mastodon / the fediverse provide a glimpse of great ideas outside the mainstream, like non-commercial, community hosting and self-governance. But outside of a particular implementation, on a Twitter-level scale, I think we need to prove a model for ownership and aligned financial incentives between platforms and the people on them.

Considering bringing back the Casual plan as an affordable option for less frequent writers, and pricing it on a sliding scale. This would basically replace the Free plan as the entry point for getting started with Write.as, and give more people access to paid-only areas like Read Write.as and Remark.as.

I’ve written about how our long-term subscription can cover those times when our users aren’t writing and publishing as much. But the downside of this 5-year subscription, of course, is the up-front cost you have to pay for it. So this time, I’d approach this subscription tier with a mind toward two kinds of users: casual, infrequent writers, and those who are excluded by our Pro pricing.

Ultimately, as always, I want to make our platform as widely accessible as possible, while making sure we can always sustain ourselves.

Made some changes to my web mixtape static site generator tonight. Not sure why it was on my mind (though now I’m listening to old mixtapes I’ve made with it). You can see an updated demo here.